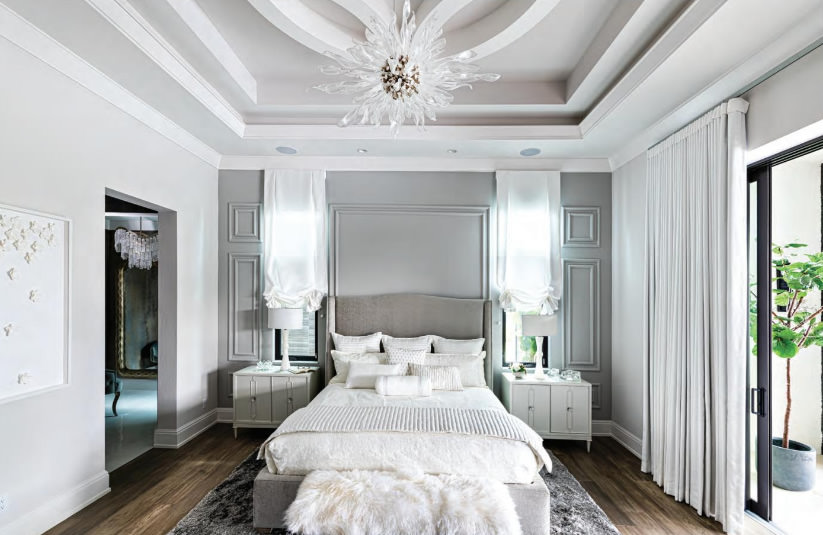 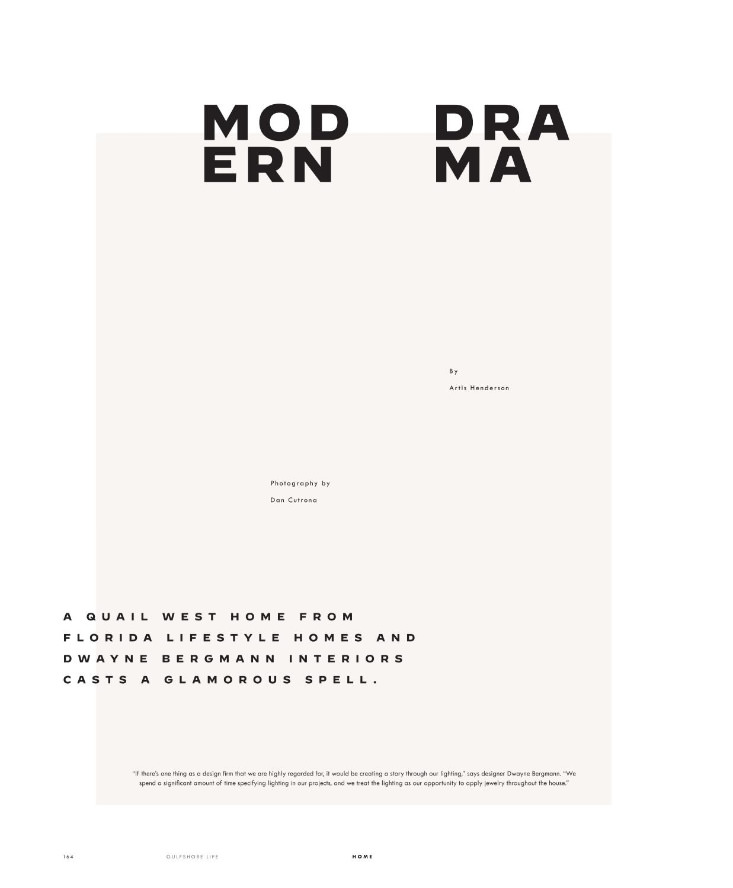 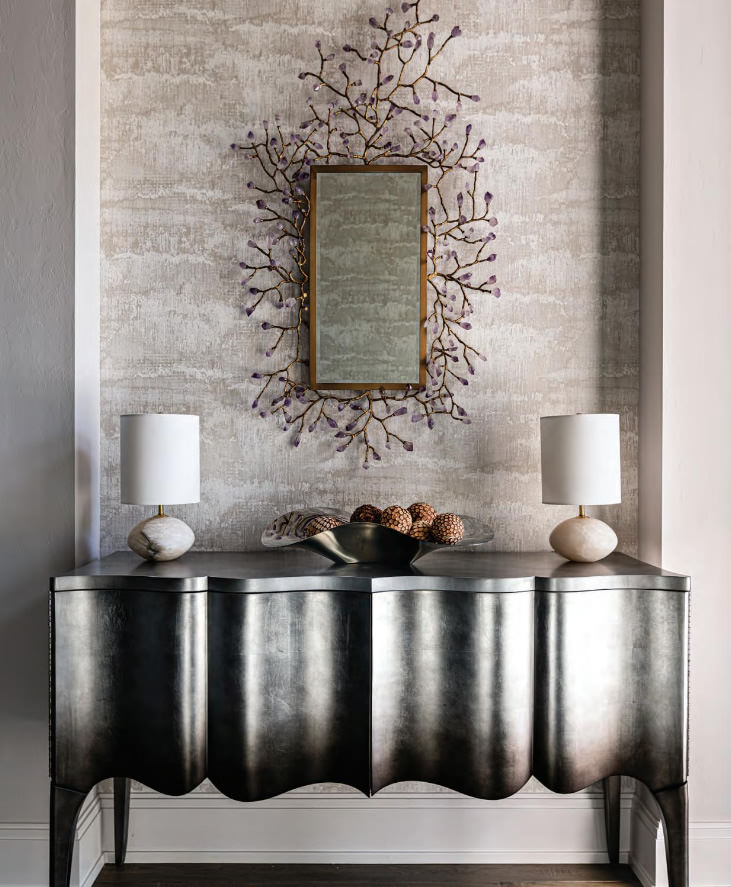 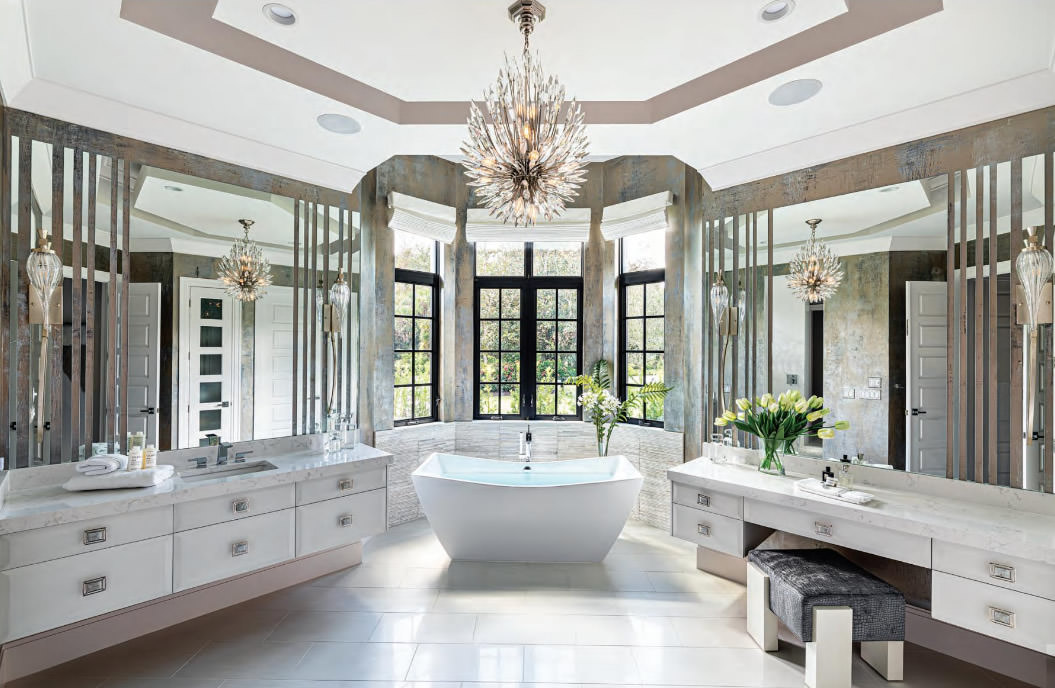 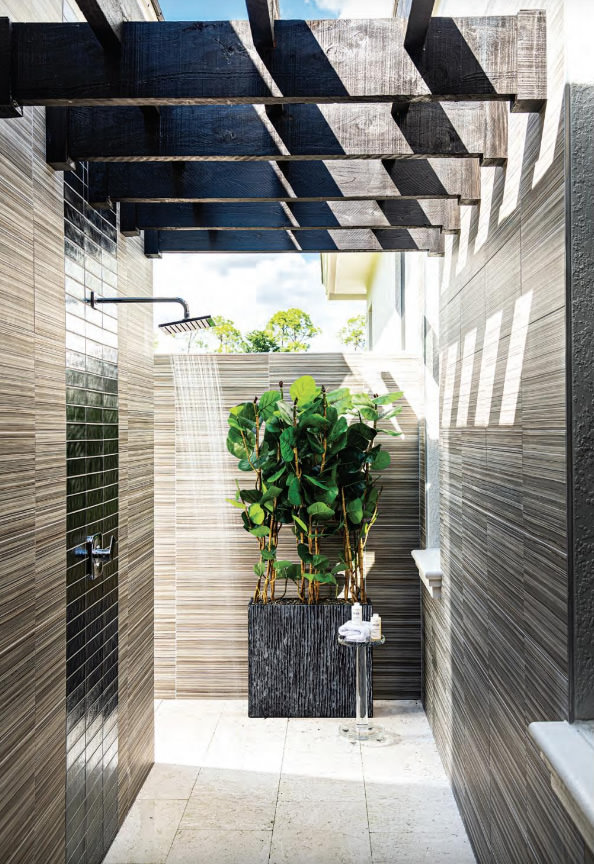 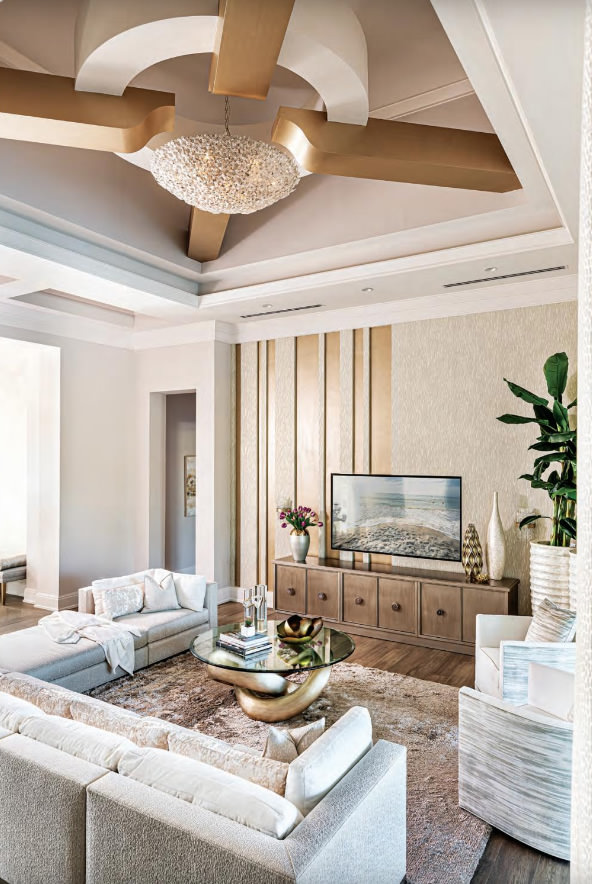 The first word to escape your lips after stepping into Brad and Andrea Weiner’s 4,500-square­foot Quail West home is “Wow.” But it’s not the last. Other words that follow: Gorgeous. Stun­ning. Beautiful. The five-bed­room, four-and-a-half-bathroom house, completed this year, was built by Florida Lifestyle Homes and designed by Southwest Flor­ida-based designer, Dwayne Bergmann.

“Brad and I wanted it to be glam,” Andrea explains as she leads a tour of the house. “Dwayne definitely fulfilled that request.”

Walking through the Quail West home, the first instinct is to look up. From the dramatic chandelier in the front entryway,to the delicate thin glass orbs of a pendant off the kitchen to the shiny chrome fandelier in the pool room, the lighting choices in each room serve as focal points of both beauty and functionality.

“If there’s one thing as a design firm that we’re highly regarded for, it would be creating a story through our lighting,” Bergmann says. “We spend a significant amount of time specifying light­ing in our projects, and we treat the lighting as our opportunity to apply jewelry throughout the house.”

“When I saw it for the first time, my initial reaction was thatwe had to treat it like a bracelet of a watch,” Bergmann says. “That’s why we painted the spokes champagne gold and created the face of the watch with the light­ing fixture that sits right in the middle.”

The fixture has the look of crystal and is very “jewelried,” as Bergmann calls it. In order to emphasize the ceiling’s architec­tural details, he made the choice to keep the chandelier pulled close to the ceiling rather than dropping it down to the standard height.

“The whole idea is to create this design element utilizing something created as architec­tural detail, and the scale of the light just fits perfectly,” he says.

The lighting fixtures serve to add a sense of warmth to the home, which is another of its remarkable features. This Quail West stunner superbly blends sophistication, contemporary design and a welcoming feeling­not always an easy balance.

“I wanted it to be modern, but modern or contemporary can be cold;’ Andrea says.

In order to create a sense of warmth while staying true to on-trend design choices, Berg­mann carefully selected his color palette. The initial inspiration was the inherent drama of black and white. But how do you take the drama of a black-and-white scene, soften it and give it a Flor­ida twist? Bergmann’s answer: a palette that uses champagne in­stead of white and, in the place of black, shades of gray that range from graphite to soft, light neu­tral grays.
“This infusion of champagne gold against graphite grays and charcoal is a color palette that re­ally creates an interesting com­bination, one that’s not overly seen in Florida,” Bergmann says.

The home’s textiles create an­other element of warmth, one that is both opulent and func­tional. The Weiners have five young grandchildren who come to visit with their parents, and the house needed materials that can handle the onslaught of small children.

“The fabrics are washable and easily manageable, yet at the same time we were looking for a sheen level or a texture level that would provide some luxury to the finishes,” Bergmann says.

The art objects, too, shade to­ward the warm. As an example, Andrea points to the coffee table in the great room, a sculptural piece in tones of pale bronze.

“That coffee table could look cold and abstract in another house,” she says, “but here it’s warm.”

Walking through the house, it’s hard not to be affected by its dramatic impact. Bergmann worked with his team to height­en the drama throughout the house, and one way he achieved this was by playing with scale.

“Mounting things higher or low­er, the scale of the furniture. In general, balancing everything out,” Bergmann says.

The house’s tall ceilings-most measure 13 to 15 feet-help cre­ate this effect, and with Berg­mann’s well-chosen statement light pieces, the scale of the de­sign stands out.

As Andrea leads the way from room to breathtaking room, she pauses at a powder bath in a hallway that runs parallel to the kitchen.

“The powder bath is arguably the most dramatic room in the house,” says Gabriella Murray, a junior designer at Dwayne Berg­mann Interiors who worked on the Quail West project from be­ginning to end.

The walls are painted with an ombreed pattern in shades of gold and dark gray. A custom mir­ror, flanked by sconces, reaches from the sink to the ceiling. It tapers to fine points at each end and widens in the middle in a statement-making, sharp-edged teardrop. The color palette here, again, is shades of pale gold and graphite gray, and the domed ceiling emphasizes another sig­nature chandelier. Yet even with all this moody beauty, the most dramatic element in the bath­room is on the columns at the room’s corners, which Bergmann had wrapped in charcoal gray mica chips. He had considered going with glitter, but when he discovered the mica chips he knew it was the right material for a bold effect.
In the great room, the eye is drawn to the large TV against a side wall and the unique archi­tectural detailing behind it.

“The Weiners were very spe­cific about not wanting to have this massive built-in, which is a traditional element within most great room floor plans,” Berg­mann says. “Instead they asked us for something that’s lighter and more interesting, something with a more artistic approach.”

Bergmann’s team pulled inspi­ration from a recent art installa­tion they’d seen, and they framed out the great room wall in order to recess the television. To the side, they created vertical reliefs.

“To everything in the fore­ground, we applied a wallpaper,” Bergmann explains. “Everything in the background is painted a metallic champagne. You see the depth variation and texture variation between wallpaper and metallic paint, and it gives us this sense of an artistic element.”

This theme of using architec­tural design instead of art pieces plays throughout the house.

“We let the house speak for itself, using light touches of art throughout,” says junior design­er Murray.

The final room that Andrea shows off is the master suite. In many ways, she’s saved the best for last.

“I told Dwayne I wanted dreamy,” she says of the master bedroom, and a glance around the space confirms that he hit the mark.

“It’s dramatic in a very subtle way,” Bergmann says. “It truly is the classic example of all-white against a silvery gray backdrop, which is quite nice.”

Stepping into the bedroom is like walking into a mansion from the golden age of Hollywood. It’s chic and modern but also glamorous in an old Hollywood way, full of decadent touches like silken fabrics and shimmery metals. Bergmann’s team custom-applied molding to the walls and hand-designed the bed. The cloud-colored bedding adds a luxurious and, yes, dreamy qual­ity to the room.

This home stands out for its exceptional interior design, but its architectural details and floor plan also make it a remarkable property. Bill Ennen, president of Florida Lifestyle Homes and the custom home builder behind this Quail West property, created the Weiner’s home from a cus­tom plan.

“We started with one of our existing floorplans and, sort of like silly putty, we pulled it and stretched it to get it how they liked,” Ennen says.

In this home, as with many Florida Lifestyle Homes, the custom ceiling work catches the eye.

“We did some really neat ceil­ing treatments in the family room, kitchen and master bed­room,” Ennen says. “That really shows off the house well.”

The collaboration between Ennen, Bergmann and the Wein­ers was key to the property com­ing together beautifully, and En­nen applauds the consideration that the Weiners brought to the home project.

“They put a lot of thought and effort into it,” Ennen says. “They lived with it while we were working on the floor plan. We recommend that to every home owner-tell us what you like, and we’ll design accordingly. They used Dwayne and his design firm a lot and made sure that therooms were the right size, the windows were in the right place. When homeowners and design­ers really think up front about how things are going to look at the end, everything works out better.”
The Weiners were also clear about their design intentions to Bergmann, and that allowed him to create exactly the home they desired.

“We kept the house contem­porary and modern and still very luxe and livable,” Bergmann says. “It’s a great combo.”

As for the Weiners, they’re set­tling in to the beauty and glam­our of their new home.